Reason 4 of 995 not to vote for Gerard Kennedy: He is a chicken 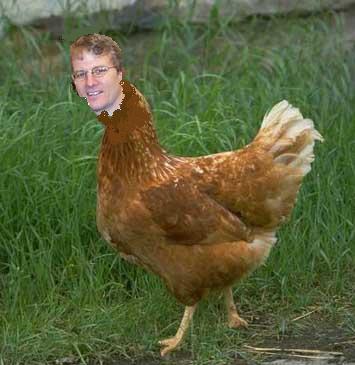 Gerard Kennedy is so afraid of Quebec, he won't even appear on Tout le monde en parle, Quebec's most popular TV show. They might ask questions. They don't live in Toronto. They eat poutine.

Mr. 1.7% is afraid Quebeckers will realise he is not so hot. They might tell their Canadian Press colleagues. Best to ignore Quebec. They vote Bloc anyway (including the riding adjacent to 24 Sussex, in Gatineau, Quebec!).