The Goddess of Democracy Would be 25 Years Old 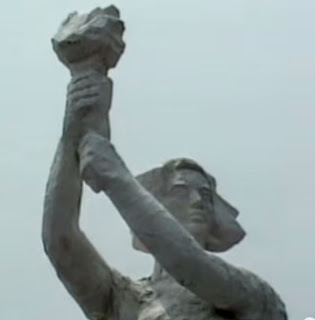 The Guardian's Media Talk is the king of media podcasts. And it is dead.

I love your podcast. It is like you guys live in a different world. I'm 100% more informed about British media every time I listen.

This is horrible news, really. This is on the same scale as the end of Diggnation. Twit.tv is still alive. So I know podcasts aren't dead. But Media Talk is dead. Long live Media Talk. It will be missed.
The Producer Matt Hill will try to revive the format with a new independant podcast starting June 6th. But you know it is going to suck (just like Top Gear America). Host John Plukett will continue to exist on Twitter. Original host Matt Wells still works for The Guardian, but he now works out of New York City where he is apparently to busy/lazy to take a few minutes out of his week to host a media podcast.
The UK is a different world. How else would North Americans have earned that Big Brother was popular there in the winter. Or that phone hacking female journalist were costing Rupert Murdoch money.
Other source:
-

Meanwhile, this blog you are reading is alive and well. In fact, the hundred dollars Google just dumped in my bank account easily paid for the bottle of vodka I'm drinking (seemed appropriate since talking about media and journalism).
I previously wrote about alternative media podcasts. Check them out and, as Mashable likes to say, leave your comments in the comment fields below. Please. Pretty please!
No comments:

In Blogs We Trust: Making Money from a Macro-Blog in the Age of Social Media

Google just gave me an other hundred bucks for all the ads on my blog (hosted by Google but written by me).
I have to admit I prefer microblogging on Twitter. That's proven by 14,000 tweets. It is a far more efficient medium to share ideas and reference material already written by others. However, blog posts have staying power. Tweets are short term. As I no longer blog frequently, my page rank on Google has taken a hit and yet  people still manage to read my old blog posts thanks to other search engines and links on Wikipedia and other sites. And then they click on the ads.
Often, the best way to change someone's opinion on something is to let them speak. As they run out of arguments, they start to self doubt. That's when they are vulnerable to new ideas. Macro-blogging does that. Whereas someone might have enough knowledge and strong opinions on a subject to write 140 characters or to forward a text picture on Facebook, they quickly run out when faced with the unlimited space of a blog post. 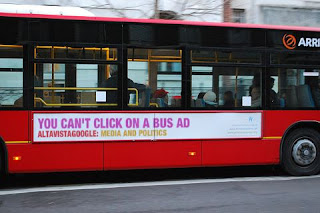 If you have real or social media friends that have strong opinions that you disagree with, encourage them to blog. Tell them about the bored government workers that read blogs on their lunch hours because Facebook is banned from the office. Tell them about the articles you wrote 5 years ago that are still read. More importantly, tell them that your drinks this weekend were financed thanks to stuff you wrote in bed.
In other news, my favourite podcast, The Guardian's Media Talk, is coming to an end. Here is the last episode (MP3) of Media Talk. The folks over at Twit.tv seem to still be able to monitze the spoken word. Anybody know of a good alternative to Media Talk? I'd settle for a blog.
No comments:

Canadians are fat and lazy. And yet we use sales tax dollars collected
from poor people's gym memberships, bicycles, sneakers and basketballs
(and income tax on their meagre salaries) to pay for things like
television, paper books and paper magazines.

Everybody benefits from socialised healthcare and education. We are
surrounded by poor people and it is quite useful that they not infect
us with tuberculous or put rat poison in our food instead of salt
(when you can't read, that becomes and honest mistake). We don't have
those things because we are generous. We have them because we are
selfish. Indeed, you could argue that being a progressive social
democrat is an act of selfishness. And I'm OK with that.

What I'm not OK with is bad public policy. Subsidised single family
dwellings via government guaranteed mortgages, for example. Subsidised
books are an other. The biggest cost in a book is the container
(printing and distributing it), and yet we subsidise them despite the
obviously cheaper alternative: ebooks.

We inexplicably subsidise rail transportation despite having plenty of
room for busses on our roads and airports that are nowhere near
capacity.

We subsidise Canadian magazines but not Canadian websites. How does
that make sense? And why are we subsidising the written word in the
first place? And TV? TV! Really! Is there anything of social value
gleaned from a nationally focused medium that painfully ignores local
issues and culture that are better served by local radio, theatre,
live bands and newspapers/websites?

Sure, the upper-middle class pay a lot of taxes. But by placating them
with things like the CBC, subsidised Maclean's and Via Rail, we are
helping them ignore the real mystery of federal spending: 28 billion
dollars a year on the military despite Canada having no enemies.
No comments:

New Brunswick's need for a French language university is dubious at best. There are only 250,000 Acadians in New Brunswick, and Quebec's quality universities are right next door (and indeed arguably closer to Edmundston and the Acadian peninsula). Worse, because tuition is very low in both Quebec and France, it is very difficult to attract students from those regions.

The University of Moncton makes up for it by attracting students from Africa. 18% of students pay around $10,000 a year to attend Université de Moncton. Unfortunately, there are still classrooms with 1 or 2 students. Every graduate program at the Univerité de Moncton is in a constant struggle to justify it's existence.
The situation at New Brunswick other universities isn't much rosier. There are only 500,000 English speakers in New Brunswick. And yet there are 3 English language public universities. And once again there is no shortage of quality institutions right next door in Halifax.
Someone needs to do the math. There is a huge opportunity cost here. Perhaps the money should be redirected to student loans or bursaries. Granted, if you are a francophone high school student living in Moncton, you'll be able to attend university at a fairly low cost if you don't mind living with your parents. But for the vast majority of Acadians, Moncton is no more practical than Rimouski or Quebec City. Dito Mount Allison in Sackville for Anglophones.
At the very least, funding should be denied to private freak universities like Crandall in Moncton. Although it's location is practical, accepting students of different faiths and then forcing them to abide by Crandall's brand of Christian morality and forcing students to attend "chapel" twice a week, is simply wrong.
Half of New Brunswick's budget comes from the Federal government. There is nothing inherently wrong with that. There is an oil windfall out west and New Brunswickers deserve their slice of the pie. However, I fear the easy money is being squandered. Students aren't winning and neither are New Brunswickers.
(The author of this blog has a university degree obtained in Quebec and works in a Moncton call centre).
No comments: 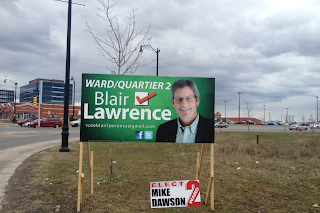 Blair Lawrence and his opponent Mike Dawson are both running for Moncton's Ward 2 seat vacant because of the death of Merrill Henderson. The election is May 12th.

Do either of them have a web page? Nope. Although Blair Lawrence does have a public Facebook page and Mike Dawson has a Kijiji page (!!!). So after spending way too much time gathering information from the Internet about the two candidates from various sources, here is a summary:
Blair Lawrence:
-Positions on anything: Unknown. He could be against puppies for all we known.
-Education: Unknown.
-Work: Subject coordinator for the Anglophone East School District. Former vice-principal and teacher at Bernice MacNaughton High School (located in Ward 2). Subject taught? Unknown.
-Lives in ward?: Don't know.
-Volunteer work? Capitol theatre and Frye Festival boards of directors.
Mike Dawson.
-Position on anything: Unknown.
-Education: Not listed on his Linked-in. But he is former military so I'm guessing high school and whatever he learned in the military.
-Work: Former military (20 years) (including at Moncton's Garrison located in Ward 2). No current job. How old do you have to be to get your military pension?
-Lives in ward? Don't know.
-Volunteer work? Various committees with his church.
So there you have it. That's it. That's the only information you have to base your decision on. Good luck.
Blair Lawrence's does have a Facebook page. To be fair, it is a public page so you don't have to log into Facebook to read it. Unfortunately, I don't think you can link to specific pages on Facebook. If you are patient enough, you'll eventually land on his April 3nd posts. He is in favour of "integrity" and "long term growth" and he also tells us what his job is (oddly enough, only in French).
Blair Lawrence is also on Twitter. I suppose you could ask him questions.
The salary for the part time council job is $18,000 a year.
-Election NB
-Acadie Nouvelle
-Community Chaplaincy
-Mike Dawson's Linked-in
-Mike Dawson offers for Ward 2 byelection
-Mike Dawson on Allevents.in
-Mike Dawson on WhereEvent.
No comments: 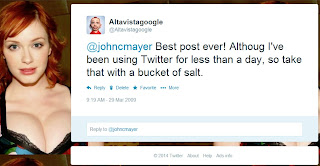 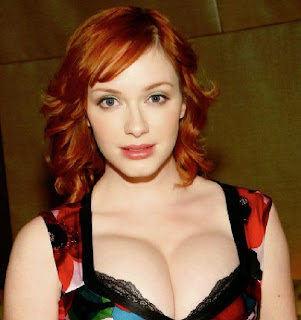 That title, my friends, is why I am blogging from my basement apartment instead of from wherever successful bloggers blog from. Success measure by money, obviously. The Woven empire though of that title. Not me. The best I could come up with was jibes at Gerard Kennedy and nonsense about puppies. Sigh.

Anyway, Woven just bought Uproxx, a "blog" I recently discovered from a lesbian friend I added after joining Facebook. It is actually quite good. Not Wall Street Journal good. Mind you. But good enough.
Photo of the Mad Men star stolen from Uproxx (who probably stole if from someone else). If you own the copyright to this picture, please be advised this blog generated 83 cents last month and that the owner lives in a basement apartment.
No comments: 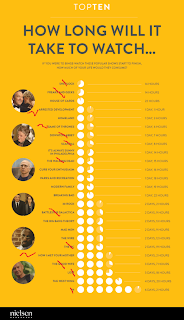 Sure you could try these yourself at nominal cost via services like Netflix or iTunes. But why trust your own judgement when you can trust mine? To be fair, I think I only binged House of Cards and Breaking Bad. And 1 binge per season at that.

The shows with a line over them I never gave a chance. The ones with a squiggly line next to them means I watched religiously until I lost interest (presumably because I got older).