Time To Switch From Trudeau to Mirabel

Planes at Trudeau airport in Dorval/Montreal are an incredible source of noise pollution. So much so that the airport has a curfew. 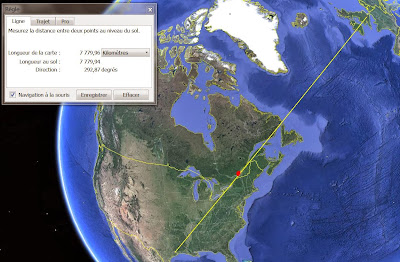 Some people in the federal government are thinking about opening an airport in Pickering, east of Toronto, to help alleviate potential congestion at Pearson. While an airport downwind from Toronto would have environmental advantages, it seems to me that taking advantage of Mirabel, an airport that is already built, and making that Canada's eastern airline hub, would make far more sense.

Dubai is about to close their central airport and move things to their new airport south-west of town. Dubai, like Atlanta, generates most of it's traffic from passengers in transit.

Unlike Altanta, Mirabel does have local transportation challenges, as there is no rail link. And from the south shore, unless you take a ferry or detour via Ontario, there is no way to get to Mirabel without crossing the Island of Montreal and it's notoriously congested bridges (although the new bridge to Vaudreuil offers and additional option for those wanting to go via Hawkesbury).

That said, Mirabel does have regional transportation advantages over Trudeau. It is only 180 km from Ottawa via the newly completed highway 50. And passengers in cars from the north shore of the Saint-Lawrence, including Quebec City, can travel to Mirabel while avoiding much of Montreal's road congestion.

From Montreal, passengers already on the island would encounter little congestion going to Mirabel in the morning. And with the subway now going all the way to Laval, it is easy to imagine a city bus shuttle service like the one Toronto has between Pearson and Kipling station (although that would be 33 km vs. 12 km in Toronto).

What to do with vacated land at Trudeau would be an issue as I'm sure it is highly polluted. There probably isn't that much demand for industrial land and Montreal can only have so many warehouses. Making it a green space while waiting for land prices high enough to justify a clean-up would be an option.

Having a big airport with 24 hour access and capacity to spare and geographic advantages  is no guarantee of success. Would ticket prices be low enough to attract passengers from Ottawa? Would Toronto passengers be willing to sacrifice their non-stop trans-Atlantic flight to Europe. Would enough passengers from New York and Boston be attracted to Mirabel (via short flights) to justify non-stops to Asia (they currently fly over Montreal from those cities)?

Still, I think the advantages outweigh the disadvantages. And Montrealers deserve a good night sleep, even if they have to wake up 30 minutes earlier to catch that morning flight to Toronto.
1 comment: