Fly Montreal-Vancouver and get a free trip to Vegas!

Vancouver, Twice a Day
On the dates I checked in February, Allegiant flies 2 flights a day to Vegas from Bellingham (Vancouver)!

Montreal, Twice a Week
Allegiant's new Plattsburgh (Montreal) service to Vegas, in February, is only 2 times a week. Plattsburgh to Vegas on Monday and Thursday, Vegas to Plattsburgh on Wednesday and Sunday. As you can imagine, the Thursday and Sunday flights are the most expensive.

No, Just No. No, No, No. Because No.
Allegiant won't sell you a Bellingham-Plattsburgh ticket because they don't want to. However, if you like Vegas and want to spend a couple of nights there, you can include the city as part of your transcontinental travel.

Who Flies to Vegas, Stays in Vegas
On some days, the Bellingham-Vegas and Vegas-Plattsburgh flights match up nicely (in fact, so nicely I wonder if it is the same plane). However, if it isn't the same plane, you probably don't want to gamble that Allegiant will be on time. So, "unfortunately" you will need to book 2 nights in Vegas. That's a shame.

Baggage
Like Spirit, Allegiant charges for carry-on. You need a bag, but you would save $120 if you left it at home. Study the baggage policy for applicable loopholes. You'd also save $16 by using Visa Debit (although the site says US debit only, I think that is out of date).

The Little Airport That Could
The bus between Plattsburgh and Montreal is $40, return. The airport is close to town, but the bus station is next to the highway. Figure $15 each way for a taxi. If you live near Montreal, you know about the cheap parking at Plattsburg airport. From Ottawa-Hawkesbury, don't forget about the brand new Island of Montreal avoiding Highway 30 ($1.50 each way).

No Toronto For You
Although you can't use Vegas as your inconvenient hub for getting to Southern Ontario, you can use it for a surprising number of destinations. You can also use an other airline from Vegas (Normal or low cost Spirit,Southwest, Frontier). Just leave plenty of buffer time in Vegas

Shortcut: http://j.mp/news2013
We don't pay for maps or encyclopedias any more, why should we pay for news or, worse, opinions?

Pay for news if you want, but I prefer to spend my money on food, rent and the occasional beer.

Here is my list of free news (keep in mind you might end up buying what is being advertised):

Alright, this got boring. I'll finish this later. I can't believe some people do this writing thing for a living all day. ;)

Please let me know if I added one of those 5 article max sites by accident.

If this view isn't enough to get you to contact your travel agent, it should at least motivate you to connect your computer to your high definition television set.

It's a bit colder in real life and it is sometimes windy. But it is always that sunny. :)

When you are done with Lake Louise you can check out Sunshine and Whistler. If you don't know where they are, you can use Google Maps.
Hat tip, Google Maps blog.

"State Comptroller Susan Combs has approved payment of $29.3 million from the state Major Events Trust Fund to organizers of November's Formula One race"

[...]
"Under trust fund rules, the amount granted to the event organizers should be equal to the amount of additional tax revenues generated by the major event." (Austin Statesman, Dec 11, 2012)

There were 117,000 tickets sold for the Austin Circuit of the Americas (COTA) race weekend. You couldn't buy single day event tickets.

So lets pretend every single ticket was sold to someone not residing in Texas. That they all decided to spend 3 nights in Austin and they all had their own room: $1181.07 average hotel spend. That still leaves $2992.72 to spend on ground transportation, food and tickets. Likely? Impossible.

-When Governments Lie: The City of Austin and the State of Texas Exaggerate F1 Impact

16 year old teens working for free, including nights. Ironically, that is the case of many teens in Ontario, where a volonteer internship is mandatory. But from a French perspective, the Chinese situation is unacceptable. The frech version of this report was shown on French TV news.

French version (same, but easier to understand if you speak French).

Alberta and Atlantic Canada Should become One 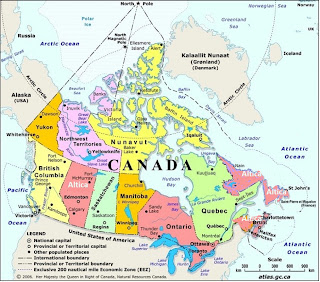 As you know, many people born in Atlantic Canadians now live in Alberta. A recent unfortunate example of this is an elderly lady who's entire family is in Alberta. She moves to Alberta to be close to them. She gets a stroke. Alberta then tells her to move back to New Brunswick!

Some of the Atlantic provinces finance a high portion of their provincial budgets with money from the federal government. Its a glaring example of taxation without representation.
Solution: merger. Atlantic Canada; Newfoundland and Labrador, Nova Scotia, PEI and New Brunswick and Alberta should become one province. I suggest we call it Altica
Altica advantages:
-Federal government equalization payments to the Atlantic region would be eliminated
-Expensive Edmonton civil service jobs could be moved to cheaper locations out east.
-Easier to find French teachers familiar with the local curriculum
-Rich Albertans could retire by the ocean side without worrying about different taxes and healthcare levels.
-Beer, wine and hard liquor would be sold in convenience stores.
-Albertans would learn to relax, New Brunswickers would gain a work ethic.
What other advantages to you see?
No comments:

I had to pause the latest 60 Minutes report on False Confessions because it was getting me angry. People become bureaucratically stupid.

Remember that unilingual blind man's dog that was barred from an English immersion class at UNB? I listened to one of the staff people involved, months after the events, still defending the decision. Of course, the person only speaks English.

That was in Fredericton. The false confessions in the 6o Minutes bit happen in Chicago.

The American Amazing Race has been to Montreal and other Canadian destinations, but I took significant pride in my country watching the Aussies navigate Vancouver.

Highlights include:
-Australians signing the lumberjack song (Monthy Python), the actual lumberjacks were not amused.
-Australian signing a Brian Adams song on her way up Gross Mountain.
-Australian asking if Toronto is in Canada.

The following is from The Amazing Race, Australia, series 2, episode 9. Hat tip RealityTVfan.org . If there is a legal way to watch Amazing Race Australia in Canada, let me know.