The 9 Countries that Voted Against Palestine

According to Wikipedia (the UN site is down as I write this), these are the 9 countries that voted against Palestine. 40 countries, like, for example, Australia, didn't care enough to form an opinion.
Canada
Czech Republic
Israel
Marshall Islands
Micronesia
Nauru
Palau
Panama
United States

When Governments Lie: The City of Austin and the State of Texas Exaggerate F1 Impact 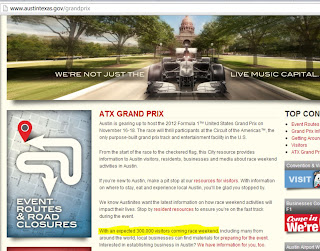 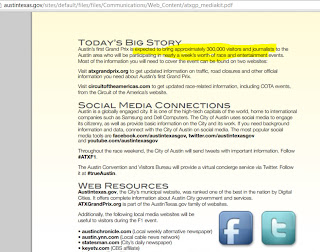 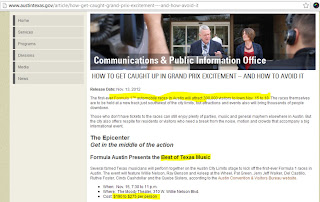 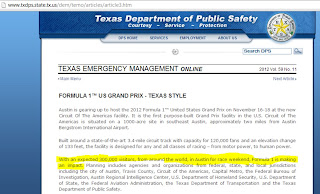 The lie: Formula 1 will attract 300,000 people to Austin.
The reality:
120,000 people spending over a hundred dollars for a sporting event is impressive. The fact that many of those 120,000 will be attending the event over 3 days, requiring a hotel stay, even more so.

Facts: The Austin Formula 1 is the only formula 1 race in the USA. The nearest is in Montreal (held in June). Formula one is to Europe what Indy racing is to America: a fairly niche product, aimed at men that attracts lucrative sponsors.
Austin is a fairly small city (area wide population: 1.7 million). Obviously, just like in Montreal (pop 3 million), people from out of town will show up. People from San Antonio and Houston could do it as a day trip, but could be convinced to spend the night because of the practice sessions and qualifying on the Friday and Saturday. In Austin, the tickets are sold as a 3 day package (you can't buy them for individual days like you can for some tickets in Montreal).
Many people will also fly in from Latin and North America, free of jet-lag  Flying is expensive, but with a Saturday night stay, flights can be relatively affordable when booked far in advance.

Austin has developed a couple of music festivals that attract tens of thousands of people. Being near San Antonio and Houston, that is understandable. Even without music, it is the capital of Texas and a fairly nice place to visit.
The most successful festival, South by Southwest, has a film and software element, and attracts up to 30,000 people over 9 days (ie, there are never 30,000 people in town at once).
The Formula 1 race has 120,000 tickets. The state of Texas somehow concluded that 300,000 people from out of town would show up in Austin! Never mind that race fans from Houston and San Antonio could show up at the track without setting foot in the city (the track is located south-east of town, outside city limits), or that some could go directly from the airport on race day (the track is a few miles away from it), even if all 120,000 F1 ticket holders came from out of town and spent the weekend, that would still not get anywhere near the 300,000 figure.
Some say the 300,000 number came about because the event is 3 days. So 100,000 X 3 is 300,000. But clearly, both the state and the city have been spreading falsehoods about the number of people that the F1 would attract.
But why?
The State
Austin was able to land an F1 race because of the promise of 25 million dollars a year from the State of Texas. $25 million is $208 per attendee. Somehow, the state plans on extracting that amount of sales tax out of the event (there is no income tax in Texas). It's not completely out of the realm of possibilities. The 400 million dollar track had to be built, workers will have spent much of their salaries in Texas. Visitors to F1 are often well healed. So even if the numbers of people attending aren't that high, the local spending could be.
The City
The city annexed the track (will take effect by next year's race). In theory, that is a windfall: The City of Austin has a sales tax. In practice, the city could be on the hook for things like water, sewers, road maintenance, public transportation, policing and fire prevention. So regardless of the sales tax and property tax base, there are no guarantees the city will break even.
By exaggerating the economic impact, local officials hoped to help nudge the event out of the expense column into the revenue column. They don't have to convince all of the people, just some.
Lies can be found here:
-http://www.txdps.state.tx.us/dem/temo/articles/article3.htm
-http://www.austintexas.gov/article/how-get-caught-grand-prix-excitement-%E2%80%93-and-how-avoid-it
-http://partners.visitsanantonio.com/node/140
-www.austintexas.gov/grandprix
Lies repeated in the Texas media
No comments:

The time zone friendly Austin Grand Prix is tomorrow and Sebastian Vettel is going to have pole position.

For your F1 enjoyment, here is a bit of humanizing.


Sebastian Vettel at Top gear - Behind the scenes par gr8manav

Texas has 25 million people. In 2013, there will be 4 major car races in Texas. One  Formula 1 (Austin), two Indy (Houston and Fort Worth) and one Nascar (Fort Worth). Well, officially, there will be two Indy races in Houston on the same weekend, but lets call that a gimmick.

As you may have heard, Texas is big. But much of the population is concentrated Dalas-Fort Worth, Houston, San Antonio and Austin. Although those cities form a nice triangle and are fairly close together compared to the rest of Texas, there are still significant distance between them: Dallas to Houston, for example, is 420km. Austin to Dallas is 300km.
Still, that is a high density of racing. France has a population of 65 million people and no major race in 2013. Metro Sao Paulo has a population of 20 million, and will have 2. However, Indianapolis only has 1.7 million people and yet will have 2 races. Greater Detroit will also have 2 races despite their economic depression.
By the way, the Austin F1 race is getting a 25 million dollar state subsidy, per year, for the next 10. That is about $250 per ticket!
Formula 1 season (Wikipedia).
Indy (Wikipedia)
NASCAR (Wikipedia)
No comments: