This 19 year old's video has garnered 300,000 views on Youtube. It has also generate 4,500 comments. My favourite being: "I﻿ hate not having an accent :( I'm American and I wish I had an accent sooo bad". I have no doubt that person is serious. The irony of wanting something you already have. :)

I'm a bit of an accent buff. Working in the inbound call centre industry, you come across all sorts. I love how this girl has a posh (aka, sophisticated, educated, from a good family) accent, but then you quickly realise you have no idea what she is saying...

3 minutes to load an application, according Engadget. If the Windows 7 phones aren't a giant flop, they will generate plenty of tech support calls. Moncton, as the tech support capital of North America*, is well positioned to reap the benefits.

*Sitel (Bell), Rogers, Sykes (BellAliant) and many others.

MacLean's is Most Corrupt Magazine in Canada 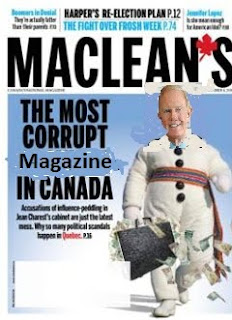 Many Canadian magazines are corrupt. After all, even in digital form, most receive a subsidy from the Canadian government. But, although I have no evidence to prove it, MacLean's is the most corrupt. And since Ted Rogers died, it has only gotten worse.

You see, MacLean's is in serious trouble. They could lose the magazine subsidy as soon as the Conservatives get a majority. Perhaps worse, they are bleeding readers. From 508,000 subscribers a few years ago, they now only have 377,000. And that is across all of Canada. The readership here in New Brunswick, for example, is negligible (so regional companies like Irving don't advertise in it).

As Saturday Night Magazine and the National Post have shown, Canadian national news is difficult. 25% of the people born in Canada don't speak English as a first language (most are known as francophones), a bunch of immigrants (250,000 per year) can barely speak English, never mind read it. Worse, with the Internet, we have many alternatives for Canadian news. And indeed, even my elderly mother wonders why she is paying for the paper version of the magazine when many Macleans articles are online.

Solution: Troll bait. Troll bait works. Even people who disagree with you will read you. Then they will come back to read the letters to the editor (or to comment online). But it only works for a while, then people get bored and move on. But MacLean's is still in the faze where it works: store sales are up!

So how is that corruption? Well, MacLean's is no longer balanced. The underlying theme is government is bad, Sarah Palin is good. But Andrew Coyne isn't trying to appease his elderly readership or the Ted Rogers billionaire kids, he is trying to make sure his magazine keeps his government subsidy. Now THAT is corruption.