I Just Gave 100 Dollars to the NDP

I just made a $400 donation to the NDP. Mostly, it is because I'm strongly against Canada's war in Afghanistan that both the Conservatives and Liberals support. I want democracy in Afghanistan. But I also want it in Monaco, Cuba and Lichtenstein. And they are closer...

My $400 donation will only cost me $100 thanks to the 75% tax credit. Even better, I used the money generated from the advertising on this blog!

-Give Now Or For Ever Hold Your Peace
-Donate To NDP and Bloc or Harper Will Be In Power For Ever
-Look at the Results Map
-How Many Canadian Soldiers Do You Want to Die in Afghanistan?
-Layton Wins Debates (Source: NDP ad)
-Conservatives Or NDP = Same Result?
-Top 10 Reasons Not to Vote Conservative
-The Urbane Prefer the NDP
-It Takes Money, not Blogs, to Win an Election
-Is the NDP Anti American?
-Quebec TV Show Laghs at Jack Layton's French

MSCONFIG Will Speed Up Your Computer 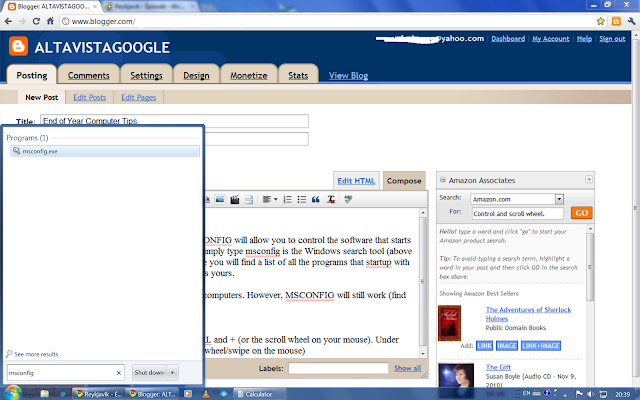 Your computer is getting slower and slower? MSCONFIG will allow you to control the software that starts up with the computer. With Vista or Windows 7, simply type msconfig in the Windows search tool (above the "start" button). Then press the startup tap. Here you will find a list of all the programs that startup with the computer. You don't need any, but the choice is yours. 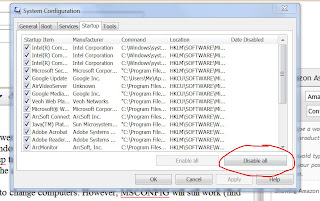 If you still have Windows XP, it is time to change computers. However, MSCONFIG will still work (type msconfig.exe under "run")

What I Have Been Watching

Internet TV is great, except it does require a bit of work as sometimes it feels like there are 2 billion channels and nothing worth watching.

So to help you out, here are some of the shows I've been watching that I recommend for when you need your TV fix.

The links below are valid in Canada, in other countries, use your favourite search engine.

Give Now Or For Ever Hold Your Peace

If you don't like sending your hard earned dollars to Afghanistan in the form of bullets and subsidized Tim Hortons coffee, this is the time to give to your favourite federal party, as you will get up to 75% of your money back in April.

The $1100 federal donation limit is great until you meet the people who donate. Not particularly impressed with any of the parties? Apathetic? You realise that local politics affects you more? You are one of the people that needs to give. Otherwise, the pro-military will have too much influence and Canada will continue to send your money, and Canada's teenagers, to foreign wars.

Peace and common sense are counting on you.

21 billion dollars is spent each and every year on Canada's military. No country wants to invade Canada. Not one. If we pick a serious fight with someone down the road, I'm pretty sure we'll find someone to sell/rent us some arms. If you are against a big, bloated federal government, donate to a party like the NDP that favours a smaller military. 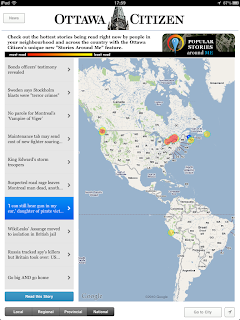 What I have already learned from the "popular around me" feature in
the new Ottawa Citizen iPad app:

.
-Nobody cares about road rage outside the Windsor-Quebec axis.
-People in Atlantic Canada, Vancouver one person in Peru love a good
pirate story.

I'm guessing very few people use the new iPad app and the Ottawa
Citizen isn't a national newspaper, still, some interesting things can
be learned when you link data to geography.

By the way, I've been using the app for a couple of hours and so far I
love it! The Gazette has a new one as well, so I assume this is a
corporate wide launch. Advertisers should note the NY Times app is no
longer on my iPad.

Not all of us in the Maritimes are trailer park dwelling pot heads. Some of us have jobs. Brain dead stupid jobs, mind you, but jobs. Moderation Town is relatively entertaining and eerily close to my day to day existence here in Moncton. Give it at least 10 minutes before you give up on it. But maybe you prefer American TV. 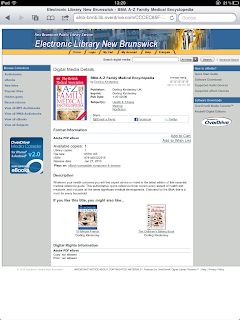 Imagine how many eBooks the New Brunswick government could buy with
the salary of just one doctor. :)
No comments: 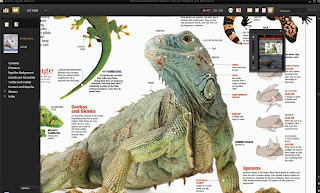 411 degrees Fahrenheit is the temperature at witch books burn
according to Ray Bradburry's Fahrenheit 411. Yet, here in New
Brunswick, although the provincially run library system is presumably
buying fewer inflammable books, the money isn't being diverted away to
mind controlling television (there is no equivalent to TV Ontario or
Télé-Quebec out here, although cable subscribers have access to both).

No, money is being diverted to ebooks that, ironically for Ray
Bradbury fans, can be read on a wall (aka gigantic TV connected to a
computer).

Despite being behind the innovation curb, Ottawa and Calgary, for
example, have had e-libraries for a while, I'm not sure the library is
quite ready for the masses. There are plenty of compatibility issues
and selection is quite limited, especially in French (a third of New
Brunswick's 750,000 people are French speaking).

But for Anglos that are computer savvy, even in this paper producing
province, the NB e-library makes a lot of sense. This is still, after
all, a rural province where 1 in 2 live in a rural area, far from any
library with much selection. As any citizen in New Brunswick can
request that a physical, burnable book, be shipped to their local
branch (from an other branch), there should be some fuel savings (take
that Alberta).

Metropolis on iPad, Body Under Ground 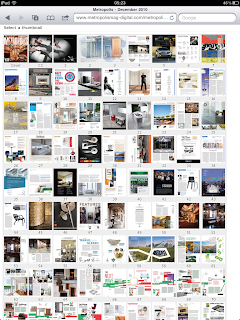 In 1995, I used to take the subway from my mountain top highrise all
the way to downtown Montreal just to sip good coffee and browse fancy
magazines.

Now I just browse them on my fancy iPad... while drinking instant
coffee and without leaving my Moncton basement apartment.

Is it OK to Rough Up An Immigrant for a Good Car Chase Scene?

Yes, obviously a good car chase trumps the time of a few immigrants.
That being said, I used to live in Montreal where period films were
often filmed. Many of these films I knew I wouldn't be interested in.
So I can relate to LGirl's annoyance.

Still, when you live in a city, you should realise that it is a shared
space. Waiting a few minutes won't kill you. Movies require city
permits to mitigate annoyance, but democratically elected city
councils know there will be some.

You be the judge. I think the officer was trying to save LGirl* from
the impending car chase scene, not hurt her. Obey the rules and nobody
gets hurt.

We put up with New Yorkers because they live in a great city. But take
the New Yorker out of New York, and all you are left with is a New
Yorker. :)

They wouldn't have filmed so many Police Academies without the rule
obeying citizens of Mississauga/Toronto. Just saying.

*A few years ago, LGirl immigrated from New York City to Mississauga. 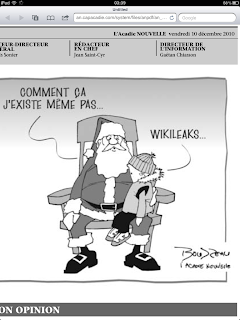 
The New Brunswick government just randomly reduced transfers to cities by 1%, as if Walkerton was a distant memory.
No comments:

Canada Does not Need Immigrants

This post is in direct response to WMTC 's post:
"Canada cannot survive without immigrants. The country's non-immigrant population growth is less than zero."
What is wrong with Canada having less people? Very few people immigrate here in the Maritimes, and people aren't exactly dying in the streets. Homes are more affordable, commutes are relatively short and you don't have to hold your nose on public transportation. In short, it is better here. Better. Not worse. Better.
Canada's population has skyrocketted over the last century. Yet what do we have to show for it? Technical innovations means we need fewer people to exploit our natural resources, not more. If potential citizens can't pass the citizenship test, buh bye. Better yet, they should pass the test before they immigrate to Canada.
Fact: Immigrants depress wages.
Fact: Immigrants use up valuable land.
Fact: Lower population is good for the environment.
I'm all for win-win immigration. But what I see is win-loose. Bring back the immigrant head tax!
2 comments:

Did you know the Grey Cup was streemed live on both tsn.ca and rds.ca this year? Cool eh.

I'm a TV addict, yet going Internet only (no cable TV or antenna), has been quite easy.

Here are some of the shows that I watch online:
(Get back here quickly with j.mp/aaatv or bit.ly/aaatv )
Outsourced and The Office on Globaltv.com , 30 Rock , Modern Family and Community on video.citytv.com or City TV iPad app , Big Bang Theory , Two and a half men , Sh*t My Dad Says, Desperate Housewives and The Amazing Race (shows.ctv.ca),  Weeds on showcase.ca, South Park ,  The Daily Show, The Colbert Report and Conan  on comedynetwork.ca, The Simpsons on iTunes, The Passionate Eye and Hockey Night in Canada on CBC.ca, Découverte on tou.tv, Season 2 of Jersey Shore on MTV.ca and, NBC Nightly News on msnbc.msn.com and , if you have access to a Vidéotron's online password: TVA's Caméra Café.

Turns out Caméra Café, like Big Brother, Survivor, The Apprentice and Next Top Model, is one of those international franchise shows. I wonder witch version contains n*dity. :)

Sadly, Infoman and Tout le monde en parles are not legally streamed on the Internet... yet.

-The Canadian Hulu , For Canadian Eyes Only ;
-I Cut the Cord, Confessions of a TV Addict in Canada ;
-Day One Of No Cable TV ;
-Day Two of No Cable TV: Not so good.
-Netflix Says Yes Minister and Hej Lesbiska ;
-PS3 Video Store Now in Canada!
-Watch a Podcast On a PS3 ;
-iTunes Canada avec films du Quebec!
-NBC Nightly News Takes Long Way to McGill ;

-Diggnation ;
-Hot for Words ;
-iJustine ;
-Twit (especially Tech News Today when Becky Worley in on) ;
-GeekBeatTV
-CommandN (Amber is good, the guy, not so much)

Audio:
-The Guardian's Media Talk (I don't know why talk about media in a country I don't live in is so compelling, but it is)
-Iceberg Radio (Adult Alternative)