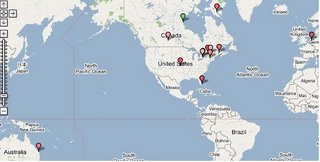 This Geovisitors thing is way cool. On Saturday, My MySpace had visitors from Iqualuit, near Canad's Artic circle, from Australia, from Holland, from Florida and other places in Canada and the USA.
No comments:

The World is a Pizza

I can't think of a food that has as many varations as pizza. The following is an excerpt from Wikipedia, the free user based encyclopedia. Some people have put a lot of work into it. Feel free to go to Wikipedia to modify anything you see below (warning, Wikipedia can be just as addictive as MySpace, although you will never get a date from Wikipedia).

What is written below does confirm something I learned the hard way: All Dressed Pizza only exists in Quebec! I thought it was universal untill a pizza guy in Toronto told me that I must be from Montreal!

There is nothing below about pizza in Egland. Apart from Pizza Hutt, I didn't see a single pizza place, or place serving pizza, in all of England! Go figure. Pizza is soooo good.

What are your favourite pizza toppings?

Due to the wide influence of Italian and Greek immigrants in American culture, the United States has developed quite a large number of regional forms of pizza, many bearing only a casual resemblance to the Italian original. During the latter half of the 20th century, pizza in the United States became an iconic dish of considerable popularity, and may have contributed to the decline of the British pie heritage previously common in American cuisine.

More pizza on Altavistagoogle.
No comments:

How MySpace has attracted so many young people in just three short years is beyond me.

As far as I can see, it is just a slow, buggy and completely undependable version of Geocities.

Granted Geocities never had so many Swedish women at their site. And I never would have expected to get a date on Internet Relay Chat. And the feature that I really enjoy: search 2 miles from my postal code. Even in a bar you can't be that selective. With the price of gas what it is, that is the killer app.

This morning I was informed that my Myspace space had been deleted. Wow. In just two short weeks I had developed relationships that I wasn't ready to loose. I should have made a backup! I should have wrote down the names of my friends. All those clever blogs that I wrote. Gone for ever.

I had a reason to be deleted (although a bit harsh). I had posted the chat that I witnessed between three lesbians in the Myspace politics room. Considering all the teens that use Myspace, I figured maybe it was inappropriate and one of my "friends" had betrayed me to the Myspace police.

Anyway, I wasn't a total loss, I still had access to the Myspace chat rooms (after the lesbian group sex conversation, now my favorite place in Myspace), and I quickly found out that a lot of people were getting that error message.

So I wasn't deleted. But the site is still incredibly buggy. So much so that people are starting to use alternative services. Do a blooger.com search of "myspace" and you will see many examples.
MySpace is to the Internet what Coca Cola is to beverages. Popular but completely unnecessary. Worse, they treat the world like one big anglo world. Granted, I'm not motivated enough to learn Swedish, so I'm gratefull. And accents seem to work (they don't always work properly in blogger).