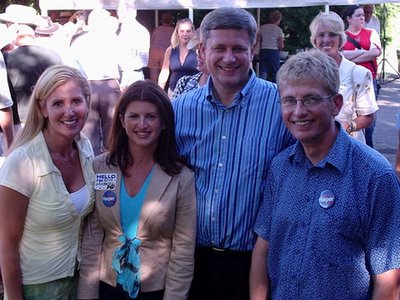 (Category: Humour)
I think it is great that Canada finally has an openly lesbian Cabinet Minister. The brunette in the picture is the Honorable Rona Ambrose, new federal Minister of the Environment. The Right Honorable Steven Harper (aka Stevo) is the tall guy on the left. The blond man on the right is his "buddy". Hey, this is Canada eh!

My friend has a crush on Rona Ambrose (hence the joke about her being a lesbian). I don't know who the woman on the left is. But, yes, it does appear that her breasts are touching those of the new minister.

By the way, I think that all cabinet ministers should speak French They don't have to be bilingual, they just have to speak French. They can be ugly, but they must speak French.

The government of Alberta has delayed the implementation of mandatory second language training in Alberta schools. The reason? Not enough teachers. As French is not necessarily the second language that is going to be taught (and part of the reason for the teacher shortage), odds are Harper will be last Albertan federal Prime Minister in a long time (Harper learned French going to school in Ontario, where it has been mandatory for a long time).

According to Sitemetre, there are people who arrive at this page because they would like to see a photo of Belinda Stronach, Rona Ambrose and Helena Guergis in bed together. I suspect Peter McKay is responsible for most of the traffic.

Open minded political pervs should head over to the National Assembly where Elsie Lefebvre is very easy on the eyes. Thanks to The Hostest Canadian for that tip.

The woman on the left is MP Helena Guergis. The man on the right is Immigration Minister Monte Solberg. Just so you know ;)

Holly smokes! Can you imagine if they _were_ lesbians?

By the way, to many people are getting to this page by googling "Rona Ambrose picture". I meen she is attractive, but this in the Internet, there is so much better to look at.